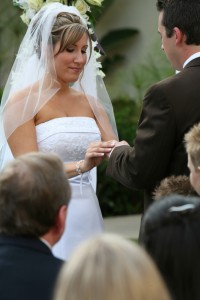 I was at a web site today that mentioned an interesting bill being considered in the Alabama state legislature. The bill "would require couples entering into a covenant marriage to enter counseling before they're married, and they attend counseling if they want to get a divorce. It also limits the reasons for which married couples can divorce."

It's an interesting idea and I'm wondering, if the bill is enacted, how many couples would take part in this. If you're currently married, do you feel you would've benefited from a legally binding agreement that wouldn't let your marriage end in divorce unless certain requirements were met?

If you're not married, do you like this idea? Remember, this law would not you let enter into the marriage without first going through counseling with your future spouse.

I wonder what kind of counseling is being required here. I'd object strongly to counseling that caused two very capable people not to marry when they should have.

All in all, if a married couple has the tools to keep a marriage alive, supportive, and yes, even exciting, then I would think that would suffice. If you haven't downloaded a copy of my book on marriages (which has many tools to help a marriage succeed), I'm making it available for awhile at no cost. Here's the link to get the book.